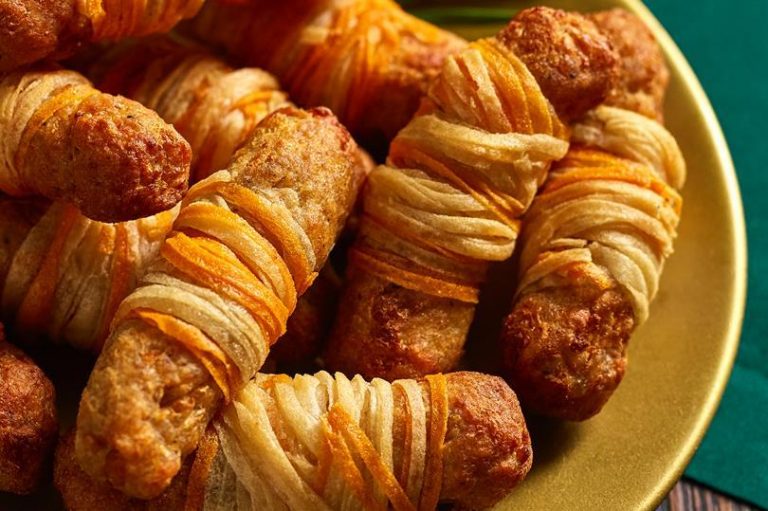 It’s October, which in retail world means it is almost Christmas. So not long now before we are beguiled by all the usual festive mini movies and wonderful in store displays.

Last year Sara and I had loads of fun trying out a load of vegan christmas goodies, with our favourite inevitably being the Pret legendary Christmas sandwich.

Here’s what on the menu this year

The Pigs in Blankets, which sure sounds very tasty, features sausages made from jackfruit and chickpeas coated in pastry rather than bacon. Meanwhile the Best Vegetable Layered Tart is prepared with spiced beetroot, butternut squash, spinach, cranberry and onion chutney and is topped with roasted chestnuts and wrapped in pastry.

The Katsu Croquettes are filled with sweet potato, carrots and red pepper in a katsu curry sauce, while the Korean Jackfruit Bao Buns teams jackfruit in BBQ sauce up with mixed vegetables in spicy sauce.

M& S quite frankly are Christmas in our book, and last years soya based Turkey Sandwich was such a hit that they kept it going all year round.

Weirdly the M & S selection is not that different from the Morrisons one. So they have a Plant Kitchen ‘No Pork Pigs in Blankets’  and Vegan Steamed Buns with a mushroom, soy and hoisin filling.

For the main course they have a Root Vegetable Tarte Tatin glazed with the ubiquitous christmas staple – beetroots.

Perhaps the most exciting part of the menu is a Plant Kitchen Festive Roast Roast that comes with cranberry and chestnut stuffing, a serving of vegan gravy and cocktail sausages. M&S is also offering a Butternut, Almond & Pecan Nut Roast that features bulgur wheat, cannellini beans, roasted butternut squash, dried apricots, almonds, sweetened dried cranberries and pecan nuts. It comes with with a red wine and thyme gravy.

And as for the sandwiches this year’s is a Vegan Sweet Potato combo with chestnut and cranberry roast.

Sainsbury’s has a really strong  selection of vegan main courses – often with a bit of a meaty twist. Maybe with half an eye on people who might be sharing their vegan christmas lunch with flexis, the supermarket has a Vegan No Beef Wellington which is based around seitan, but also comes with mushrooms, parsnip, and spinach, tucked up in a puff pastry finish.

If that sounds too meaty Sainsbury’s has a Vegan Three Nut & Mushroom Roast with Redcurrant & Port Gravy, and a weirdly named Vegan Jewelled Root Vegetable Wreath with Mixed Berry Sauce.

They are all gone big on the vegan trimmings this year too with Vegan Mushroom Sausages wrapped in vegan bacon and mushroom stuffing balls.

And for pudding there’s Vegan Lentil, Cranberry, and Almond Melt in the Middle Pudding.

Wicked Kitchen is going festive very soon. Launching on the 28th October is a Festive Feast Wrap that comes with pea protein “turkey”, parsnips, crisp greens, traditional sage and onion stuffing with cranberry and creamy vegan gravy mayo. It is all squeezed into a  soft, grilled tortilla.

Finally Waitrose unveiled its Christmas range a few weeks back. There is loads of it. Starters include Vegan Pâtés, Vegan Mini Beet Wellingtons and Vegan Moroccan Mushroom & Chickpea Pittas. While for mains  there’s the Vegan Festive Ring which features apple & cranberry and mushroom & leek bangers with a fruity stuffing and crunchy parsley crumb in the centre, Apple & Cranberry Bangers and The Vegan Root En Croute which comes with roasted carrots marinated in smoky paprika and dill.

No word yet on the Pret Christmas sandwich – but it sounds like they have been busy.